Born in 2007 as a music project of renewal and ‘update’ of the Italian film soundtracks of the early ’70s, especially those of the police/crime movies, Calibro 35 immediately imposed themselves within the international music scene, thanks to the wide range of their proposal, not actually that easy to digest as one may think. Cleverly directed by Milanese producer Tommaso Colliva, the band has quickly evolved making their own those sounds they were inspired by, releasing various LP’s and playing hundreds of concerts, both in Italy and on foreign soil. Their songs are mainly instrumental and embrace rock, funk, jazz and classical music in a unique way.

“High Tension vol. 35 / Calibro 35 plays Lesiman” slightly shifts the quartet’s action scope still towards music for films but, especially in this case, unrelated to the typical soundtrack context; the reference is the so-called ‘library music’ which, as the term itself suggests, can be defined as a discotheque made of sounds and compositions rich in experimentation, sometimes avant-garde and label-free, which film directors drew from to sonorize their works. This is a world which Calibro 35 are undoubtedly related to from the beginning, but that they had never dealt with as strongly as in this record: here the four-piece, accompanied by Sebastiano De Gennaro on percussion and Luisa Santacesaria on piano, reworks some compositions by the famous Paolo Renosto / Lesiman firstly published in the early ’70s.

“High Tension vol. 35” is therefore naturally different from anything the group has delivered to date: ethereal, abstract, much more jazzy and open to improvisation, while also making use of the typical rock music instruments. AMS Records is proud to be including Calibro 35 in its roster, and highly suggests you not to miss this little gem! 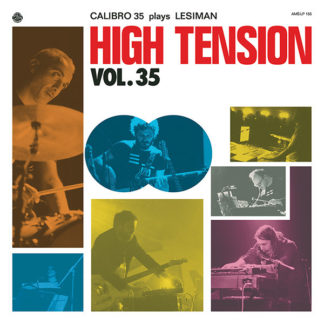